A beggar is a poor person who is begging for money to meet his basic needs for the survival. They are beggars because they have no option to meet their basic needs for survival, no jobs & are without homes.

Delhi High court recently gave the historic judgement related to “Bombay prevention of begging act”, 1959. It turned down the act which defines beggar a criminal & begging a criminal offence and those doing the act should be put behind the bar for period varying between one year to three year.

Delhi High court turned down this act as unconstitutional and thus clearing the way towards decriminalization of this act. It was a judgment that was long overdue. Beggary is a social problem. One has to deal with it in a holistic way.

In its judgment HC further observed that state can’t put people begging for a living behind the bars. They were begging for money because beggar have no option left but to beg for meeting his existential needs. Putting them in jail for this act is violation of their fundamental right that is “Right to live”.

In the absence of a central law related to begging, many states have adopted the Bombay Act. Currently there are twenty two Indian states (which includes two union territories) including Delhi which has adopted the” Bombay prevention of begging act, 1959″.

What Bombay prevention of begging act, 1959 can Do

This act criminalizes begging. Those involved in this practice should be arrested and sent to beggar homes (a certified institution) a sort of rehabilitation.

State Police can arrest any individual who is found begging and that too without a warrant.

The detention is not just for the person involved in begging but their dependents too, unless the dependent is not a child i.e., above 5 years of age. If less than 5 years of age then that child will be  kept with his/her mother if she is a detainee.

Now, what is the definition of a child according to this act?

Those certified institution or beggar homes has the power over the beggars under this act to and can take some manual work as specified by them. And if that detainee or beggar disobeys the rule of beggar homes then he will further sent behinds the bars. 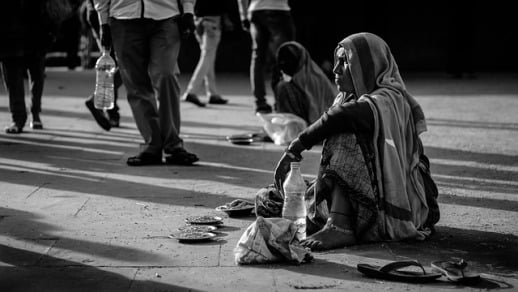 Definition of begging under this act is  quiet vague as this act defines begging which includes any person on street performing some dance, singing song or performing some act in lieu of receiving some money from the onlookers.

Now such an unclear or vague definition gives the authority unbridled power to arrest someone performing beggary and that too without a warrant  and harass them.

During some important function of national importance like republic day and Independence day, beggars are removed from the streets. It seems like the persons involved in the lawmaking consider these persons as a nuisance to the society and wants to remove them from those spaces completely.

Delhi High court in its judgement raised many points about this act.

It said Begging is a person’s last resort to get itself some food and basic necessities of life. If you arrest these persons under the Bombay prevention of begging act, 1959, then you violating Article 14 (equality before law) and article 21, Right to life  of Indian Constitution.

Making them restrict their act of begging or criminalizing them is like restricting their fundamental right to communicate to someone about their plight and get some help.

Delhi High Court further said that it was States duty to provide the basic necessities for its survival to its citizens. It is mentioned in Article 21 of the constitution which states that it is the states duty to provide basic requirements for survival i.e., food , cloth and shelter to its every citizen. If state unable to fulfill this then its state failure to discharge its obligations.

These poors are just making their voices heard for a living and being alive. Criminalizing them through some act, will only shift the problem without a solution.

Eradicating poor is not the solution but the poverty is. Root cause should be dealt with. If you provide bare essentials of life to these vulnerable section then the problem will automatically gets answered. Making arbitrary law won’t solve the problem.

Significance of the judgement

This judgment is seen as heralding of a new era. A judgment that was waited since long. This act was like the of a dictator.

It infused in the mind of peoples that our constitution is a progressive one.

Delhi High court judgment gives the idea that all persons are equal irrespective of its condition and situation and should be dealt in a more humane way and not haphazardly by making some arbitrary law.

The judgment accepted that poverty can’t be a crime but a condition that needs to be improved.

Proper Steps ought to be taken for rehabilitation and integration of the most ignored & marginalised section of the society.

State should bring alternative legislation by considering all the aspects of the society in a practical way for the issue like forced begging.

A partial ban on begging will be a good idea to begin with. Also, arrangements should be made to send these beggars in some reforming home from where they can learn to get integrated in the mainstream society.

Organized begging racket should be dealt with strongly with some alternative means like a law based on trafficking.

Governments support program like that of state of Bihar’s Mukhyamantri Bhikshavriti Nivaran Yojna (MBNY) should be emulated.

Bihar’s Mukhyamantri Bhikshavriti Nivaran Yojna (MBNY) is a scheme for the beggars in which through the means of Aadhar card beggars will be given the benefits of governments schemes meant for them.

Help of Non government Organizations has been sought for making of Aadhar cards of these sections. Rehabilitation centers set up for with medical treatments, family reintegration and vocational training.

Note: Koshish is a Field Action Project of “Tata Institute of Social Sciences”.

A similar step like this will yield positive outcomes for the society and state as a whole and will turn the social problem into a dividend. As it’s rightly been said that “Beggars aren’t choosers” so it’s duty of the state to rehabilitate them and make proper legislation for the integration of the most criticized section of the society.