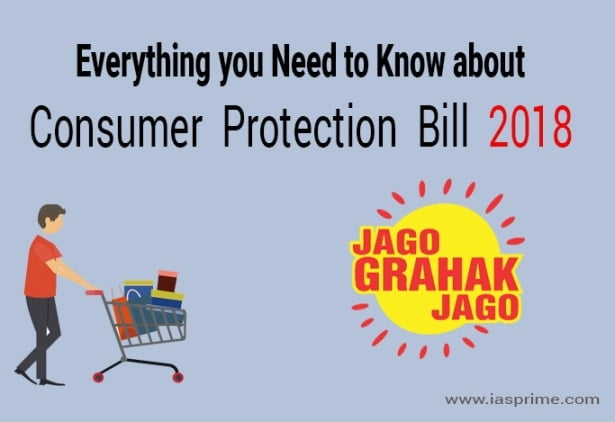 Consumer Protection bill 2018 enforces consumer rights in a way that if the consumer finds a defect in goods and deficiency in services then the bill provides mechanism for redressal of complaints which gets filed.

Highlights of the Consumer Protection bill 2018

# If the consumer finds a defect in goods and deficiency in services then the consumer can file a claim and the bill provides mechanism for redressal of complaints.

# If a consumer suffers an injury from a defect in a good or a deficiency in service, he may file a claim of product liability against the manufacturer, the seller, or the service provider.

# Consumer Protection bill 2018 aims to setup the Consumer Disputes Redressal Commissions which will work as quasi-judicial bodies to adjudicate disputes.

The Consumer Protection bill 2018 sets up Consumer Courts to hear complaints on matters like:

Such complaints can be filed electronically and from where the complainant resides or works.

# The bill defines contracts as ‘unfair’ if they significantly affect the rights of consumers. It also defines unfair and restrictive trade practices.

# To protect, promote and enforce consumer rights the Consumer protection bill 2018 is aimed to set up the Central Consumer Protection Authority.

# The Bill establishes Consumer Protection Councils at the district, state and national levels to render advise on consumer protection.

# The State and National Councils are headed by Ministers in-charge of Consumer Affairs.

# The Bill empowers the central government to appoint, remove and prescribe conditions of service for members of the District, State and National Consumer Disputes Redressal Commissions.

# Appeals from the National Commission will be heard by the Supreme Court. The Commissions will attempt to dispose of a complaint within three months if the complaint does not require analysis or testing of commodities.

# The Commissions (whether District, State or National) may refer a matter for mediation if the parties consent to settle their dispute in this manner.