Kerala’s own Chola Naikar Tribe is moving from hills to plains. They lived in Meppadi forest range under South Wayanad forest division, Kerala.

Recent Heavy rains has shaken their lives and its getting difficult for them to survive up on the hills which they previously leave only during some medical emergency.

Collecting wild honey and herbs in the forest are their main occupation on which they survive. Their name Cholanaikar or  Cholanaikan defines itself  because they inhabit the deep forests.

‘Chola’ or ‘shoals’ which means deep ever green forest, and the word ‘naikan’ means King.

A recent report by the National Centre for Coastal Research (NCCR), under Ministry of Earth Sciences said that among all states West bengal recorded the maximum coastal erosion.

West bengal which is located on the eastern side of Indian peninsula has one of the largest deltaic regions in world  with a largest single block of tidal halophytic mangroves forest known as Sundarbans. Sundarbans is in the UNESCO World heritage list.

Sagar, is the biggest island on Sundarban archipelago.

According to Wikipedia, coastal erosion is often defined as “the loss or displacement of land along the coastline due to the action of waves, currents, tides. wind-driven water, waterborne ice, or other impacts of storms”.

The people moving out from Sunderbans as their dependency on economic activities centred around coastal zone is getting eroded. Researchers called them as climate change refugees.

Water level in Siang river is now receding after improvement in weather conditions in Arunachal Pradesh. 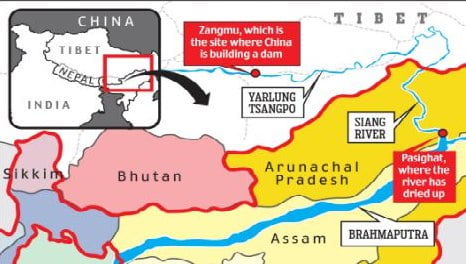 After China released water into the Siang river (the Indian side of Brahmaputra river) a flood alert has been issued to these northeast states. First time in 50 years that water levels of Siang river has risen to this level as said by Alo Libang, Rural Development Minister of Arunachal Pradesh.

Vistara the Joint venture of Tata Sons and Singapore Airlines has got a retro look given the 150th anniversary of Tata group. Vistara going retro, colored one of its plane the A320 in Sepia.

It’s the same type of paint scheme which was used by erstwhile Tata Airlines – India’s first airline founded by J.R.D TATA. He was the first Indian to hold a commercial pilot license. Tata Airlines was launched in 1932 and it became a public limited company in 1946 and later called as Air India.