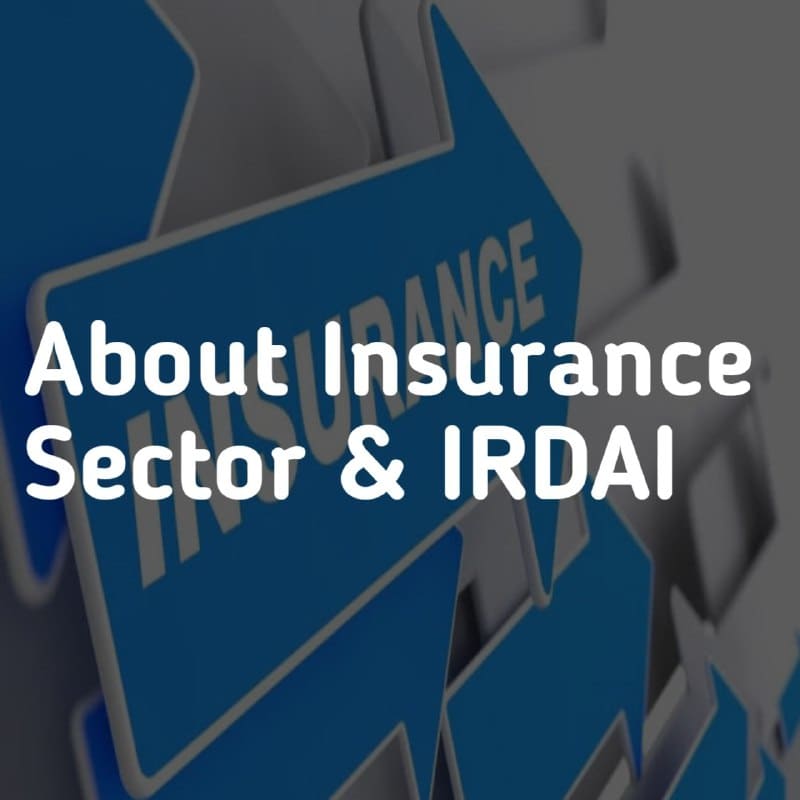 It is an is an autonomous, statutory body which is given the task to regulate and promote the insurance and re-insurance industries & insurance agency in India.

An Act of Parliament passed by the Government of India in 1999 known as Insurance Regulatory and Development Authority Act, 1999 which led to its creation.

The headquarters of Insurance Regulatory and Development Authority of India (IRDAI) are in Hyderabad, Telangana.

What is the Structure of IRDAI ?

It is a 10-member body which includes:

Insurance was mentioned in the ancient writings of importance in India, like Manusmrithi & Arthashastra.

Life Insurance business began way back in 1818, when the first Insurance company established in India named as Oriental Life Insurance Company in Calcutta.

British Insurance Act was enacted in 1870. Those were the times when the insurance sector was dominated by British Companies.

After India gained independence, The Government of India decided to nationalize the insurance industry.

An ordinance was issued on 19 January 1956, nationalizing the life-insurance sector, and the Life Insurance Corporation was established that year.

Life Insurance company had a monopoly until late 1990s. After that the insurance industry was opened for Private Insurer.

Mission and vision of the Insurance Regulatory Development Authority (IRDA)

To speed up the orderly growth of Insurance sector & insurance agency to ensure the benefit of common man and for providing long term funds for increasing the growth rate of Indian economy.

To ensure the promotion, monitoring, and enforcement of high standards of integrity, competence, financial soundness and fair dealing of those insurance agency which are regulated by the IRDA.

To ensure fair, transparent and ordinary conduct in the financial market which deals with insurance services and to build a reliable management information system for enforcing higher standards of financial soundness among the insurance market players.

To ensure that proper actions are taken in case such standards are inadequate or are enforced ineffectively.

To promote self regulation in the day today working activities of the insurance agency which are consistent with the prudential regulatory requirements.

The Insurance Regulatory Development Authority (IRDA) is an autonomous and apex regulatory authority/ insurance agency of the Government of India. The section 14 of IRDA Act, 1999 lays down the powers, functions, and duties of the IRDA.

It has the responsibility and power to issue a certificate of registration to the applicant and renew, modify, withdraw, cancel or suspend any of such registrations.

To specify the required qualifications, practical training and the code of conduct for the intermediaries or the agents and insurance intermediaries.

To specify the code of conduct for the loss assessors and the surveyors.

To promote efficiency and effectiveness in the insurance business.

To promote and regulate the professional organisations which are interconnected with the insurance and reinsurance sectors.

To levy fees and charges which are essential to carry out the purposes of this IRDA act.

To call for information from, undertake inspection of, and conduct inquiries and investigations along with the audit of insurers, intermediaries and the organisations connected with the insurance businesses.

To control and regulate the rates, advantages, terms, and conditions offered by the insurers dealing with the general insurance business not controlled by the Tariff Advisory Committee under section 64U of insurance act, 1938.

To specify the manner of maintenance of books of account and the statement of accounts rendered by the insurers and the insurance intermediaries.

To ensure the regulation of financial investment of funds done by the insurance companies.

To regulate the process of maintaining the margin of solvency.

To adjudicate the disputes arising between the insurance companies and insurance intermediaries etc.

To supervise the functioning and working of the Tariff Advisory Committee.

To specify the percentage of the premium income of the insurer for financing the schemes for the promotion and regulation of professional organisations.

To specify the percentage of life insurance and general insurance businesses to be undertaken by any insurance agency in the social sector and rural areas.

To exercise any other power which may be prescribed.

Renew, modify, cancel or suspend this registration certificate as and when appropriate; promote efficiency in conduct of insurance business