Launched from the state of Jharkhand, the ambitious scheme of the central government was announced from red fort during Independence Day speech. 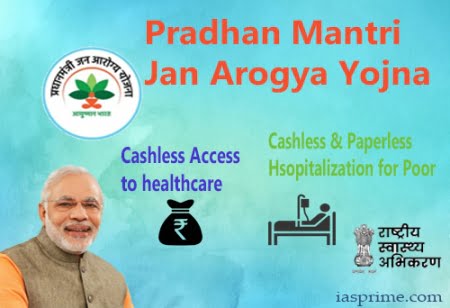 –>  This scheme will provide cashless hospitalization and treatment for 1354 illnesses or surgical diseases.

–> It will provide Rs. 5 lakh per family annually based on Socio-Economic Caste Census database.

–>  This scheme will not have any cap on the size of family & age.

–>  It covers pre existing conditions also, like if someone carrying a disease the insurance will cover that also.

–>  Private hospitals would also be part of the PM Jan Arogya Abhiyan scheme.

–> It will also cover emergency care for injuries.

–> PM Jan Arogya Abhiyan is fully portable throughout the Nation. Consider it like one number one nation (as regard to the mobile number portability). 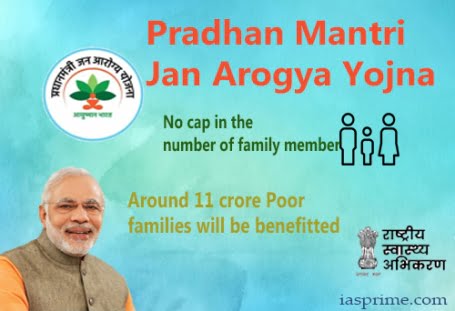 Like, when a Patient registered under the Jan Arogya Abhiyan scheme in one state he/she can avail benefit of the scheme in other part of the state in India.

For example, if a person registered under Jan Arogya Abhiyan scheme falls sick in  a state other than its home state, then he/she can avail the benefits of this scheme by getting medical care in that very state where he fallen sick. And Home State of that patient will pay for the services availed.

Expenditure incurred in payment will be shared among center and states in a defined ratio:

–> Many thousands of  Ayushman Mitras are being trained at various facilities.

–> Ayushman Mitras will receive the beneficiary and check for eligibilities and provide the care.

–> System of Patient Feedback & grievance redressal will be there and all these will be digital means paperless.

–> Almost all the states of India has signed Memorandum of Understandings (MoU) with Central government for the implementation of the scheme after its launch.

–> States like Punjab, Delhi, Odisha, Kerala & Telangana has yet  to sign so the scheme will not be implemented in those states.

–> September 25 (birth anniversary of Pt. Deendayal Upadhyay) is the chosen date for the scheme to become full fledged operational.

Why this Scheme Needed

An annual report National health Profile 2018 which is released by Central Bureau of Health Intelligence (CBHI) has given some very serious facts about public health care, It said that:

–> India spends only 1.3 per cent of its GDP on public healthcare. It is very less when compared to global average of six percent.

–> There is a serious scarcity of healthcare centers across the country and doctors to people ratio is very low which is 1 doctor on 11000 people.

–> Report said that India is even behind some of its lower GDP Neighbor Nation in terms of public healthcare expenditure, like Sri Lanka, Bhutan and Maldives.

Sweden leads the chart globally on expenses related to public health care which is 9.2 per cent of its GDP.

–> After implementation the poor will get the premium health care at almost no cost.

–> Now the poor who suffered heart attack can go for premium heart related surgery, a worker can opt for orthopedic implant free of cost.

–> It will provide quality service to the downtrodden and follow up mechanism will ensure its accountability too towards the patients.

–> Patients follow up and outcomes will be closely monitored.

–> It will be a big factor helping in narrowing down of below poverty line benchmark as health related issue causes some 5 to 6 crore people fall below it every year.

–> Scheme has the potential to create lakhs of jobs, especially for women.

Where does this Scheme Lacks

–> Primary health care is not included in this Scheme.

–> Focus is more on secondary and tertiary level hospitalization.

As we know if first step i.e., Primary health care  is taken care of then it will reduce further cost of health care, both for the state and patient.

–> Lack of Private hospitals in backward districts like that in Mewat, Haryana.

Due to the strict empanelment criteria of the scheme there is not a single Private facility to meet that criteria in Mewat.

Initiative is good but finding specialist for delivering the services will be a tough task.

–> Some states won’t be able to deliver the required services covered under the scheme due to lack of specialist. This will mean inter-state travel for people of some states like Odisha, Bihar & Uttar Pradesh to find a specialist.

So in near future payment issue might lead to dilution of efforts by the healthcare providers when getting delays in their reimbursements from the government.

To make this Jan Arogya Abhiyan scheme a success, centre and states have to move together and work towards making it a model example which is being taughted as world’s largest health protection scheme.

Effort and Initiative is laudable and India doing well to achieve universal health coverage and one of its Sustainable development goal.

Success of these schemes are necessary for building a new and healthy India.