Any Natural Adverse effects of Nature like that of flood, volcanic eruptions, earthquake, hurricane/tornado which causes great damage to mankind or there a large number of people suffering is termed as Natural Disaster.

India has put 7 adverse Natural processes on its official list of natural disaster, they are:

By officially recognizing adverse natural process as natural disaster/calamity makes the populations who are affected by this eligible for financial assistance from Central and State disaster funds plus putting these disasters on the official list of natural disasters would make the concerned official act fast which prevents further loss of life. 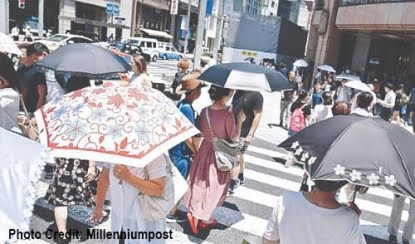 An unprecedented Summer season heatwave striked Japan which claimed as many as 65  lives in a week. In City like Kumagaya which recorded 41.1 degrees is the highest ever in Japan’s recorded history. This city is quite near to Tokyo. Japan’s weather agency has declared this heatwave as one of the worst in recorded history of Japan as a Natural Disaster.

As quoted in CNN– an upper high level pressure system was blocking other weather systems – such as a cold front – from coming through, “thus a dome of heat built over Japan and surrounding regions.” Also Summer season goes to its peak in August in Japan, citizens are already in the grip of fear for the time which is about to come (Japan summer season lasts June to mid-September).

Other Weather related NEWS  are, Tropical Depression  named  Son Tinh which triggered Flash Floods & landslides in Vietnam. Son Tinh in Vietnam means “The spirit of the mountains” or “Mountain genie“.

A Tropical Depression forms when a low pressure area is accompanied by thunderstorms that produce a circular wind flow with maximum sustained winds below 63 kmph.  When this sustained winds increases to speed of above 65kmph to 120 kmph becomes the Tropical Storm.

Tropical Storm / Typhoon Ampil has hit Eastern China province. Many areas of Shanghai got affected and many flights got cancelled. Typhoon has a has wind speed of (118–149 kmph) 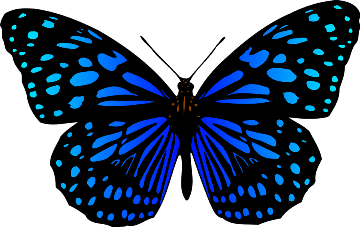 India celebrating National Moth Week, where citizen scientists of India were to document the insects & observe it in the week long affair. Moths are easily attracted to lights and this  makes the work of enthusiast easy who are trying to photograph them mainly in the backyard of their Home. Main reason for this to increase awareness about moths and their importance in the Ecosystem. This is being celebrated internationally in around 39 other countries in the last week of July.

Welcome to the new age of humans   called as Meghalayan age.It began 4250 years ago when a two decades of planetary drought ocuured as said by according to the International Union of Geological Sciences (IUGS).According to geologists  earth has a history of  4.5billion years. its divided in Eon > Era > period > Epoch > Age.

A Stalagmite rock found in Meghalaya, India  a northeastern state which provided chemical signatures as evidence.  A stalagmite is a type of a rock formation that forms on the floor of a cave due to the accumulation from ceiling drippings.

According to the BBC report, the Meghalayan Age began when a mega-drought devastated civilizations across the world, whose effects lasted two centuries. It severely disrupted civilizations in Egypt, Greece, Syria, Palestine, Mesopotamia, the Indus Valley, and the Yangtze River Valley.
Atmospheric circulation & shifts in ocean might have triggered this as said by ICS. International Commission on Stratigraphy (ICS) is the official keeper of geologic time.

Currently we live in the Holocene Epoch, which reflects everything that has happened over the past 11,700 years — since a dramatic warming kicked us out of the last ice age, the BBC reported.

According to the International Commission on Stratigraphy (ICS), Holocene itself can be subdivided. ICS is the official keeper of geologic time.

As published in Indian express, the Meghalayan Age is unique among the many intervals of the geologic timescale. Its beginning coincides with a global cultural event produced by a global climatic event, said Stanley Finney, Professor at Long Beach State University and Secretary-General of the International Union of Geological Sciences (IUGS), which ratified the ICS proposal.

Now some more points to make it clear as where we are in terms of age, epoch, the correct sequence etc, that will help in short answer writing in UPSC Mains and rule out wrong ones in Prelims.
So let’s have a look:

Currently, we are in Meghalayan Age which is the latest or the Youngest of the Holocene Epoch we live in.

The first phase of Holocene or say initial phase is known as Greenlandian. It marked the end of Ice Age.
After Greenlandian started Northgrippian (middle phase). It started with a massive cooling effect covering the world which in turn disrupted the ocean current to a great extent.

So finally  we are in 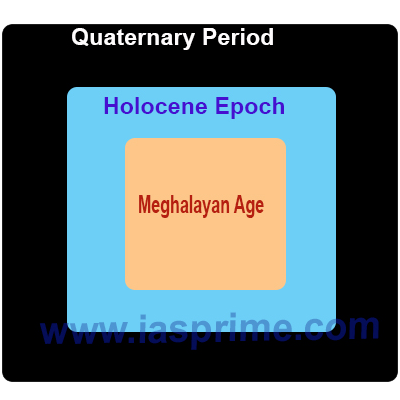 Hope this all age & epoch related stuffs got clear by now.

What is Extradition? Measures to be adopted to make the Extradition process Effective. What is Deportation ?