Parker Solar Probe – NASA’s ambitious Solar Probe mission to touch the outer corona of the Sun took off on August 12, 2018 from Cape Canaveral, Florida. It will be helpful in solving many mysteries about the Sun.

The satellite is expected to go as much near to the Sun which is not done by any other satellites before and to provide vital information about Sun’s atmosphere and dangerous solar storm which will be of much help in future.

Carrying the spacecraft, the Delta IV Heavy rocket took off in the wee hours of Sunday Aug 12 early morning at around 3.30 AM. The Probe is considered as the fastest moving manmade object in the history.

This is the First space craft which is named after a living person, Eugene Parker. He is an American solar astrophysicist, ageing 91 and who first described the phenomena of supersonic solar wind way back in mid 1950s.

Over the next seven years(as the mission is till 2025 only), Parker Solar Probe will assess dynamics of Sun’s corona, the place from where great amount of activity takes place which affects our Earth seems to originate.

This mission will gather information about Sun’s structure, magnetic & electric fields and energetic particles moving near the Sun. It will help Scientists and researchers in solving: 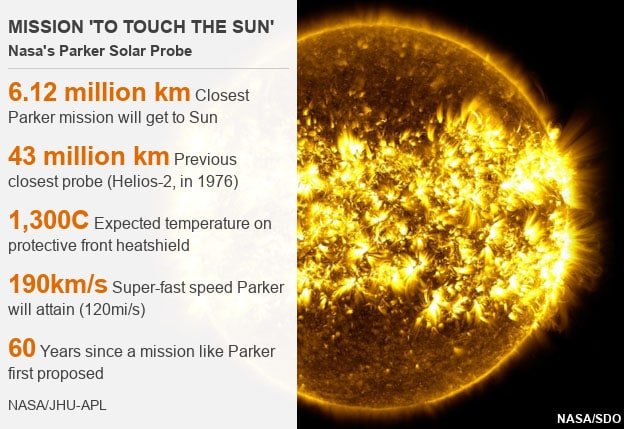 NASA was looking for a mission like this since late 1950s. They wanted to make a satellite sturdy, light weight & compact so that it can travel at incredible speed which was needed in this “solar probe mission”. They did this by making PARKER SOLAR PROBE as small as a size of a small car. It will go as close as 4 million miles from the surface of Sun. It is one of the most ambitious and bravest probe ever done by NASA.

According to the US space agency, Parker Solar Probe has been designed to withstand the extreme conditions and temperature fluctuations for the mission.

Designed with ultra high technology, a new carbon heat shield & many other high technologies to withstand extreme temperatures near Sun. It has its self cooling mechanisms inbuilt too. To know more about this CLICK

Helios 1 & Helios 2 launched in 1974 & 1976 respectively were the first move by mankind to study the Earth’s star, the Sun. It sent important information about Sun’s environment (heliosphere) & forces active in corona (outer atmosphere).

Let’s get to know about some other terms related to this topic which will help in prelims and Short answer writing in Mains. 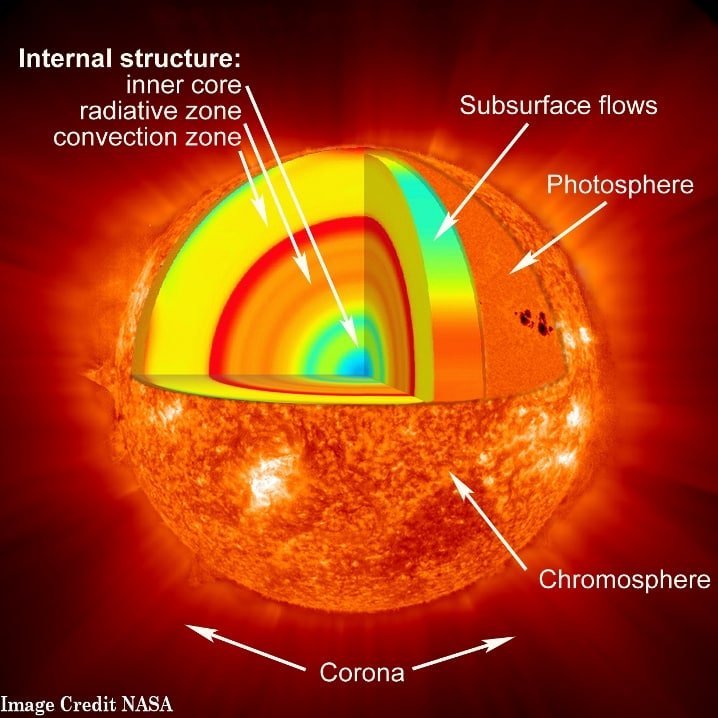 Sun is surrounded by huge masses of gases called its atmosphere. The outermost part of Sun’s atmosphere is Corona. Extending to some millions of kilometers in the outer space is mainly hidden by Sun’s bright light from the surface and can be seen easily during a total solar eclipse (and with a Coronagraph too)

What is Solar Storm 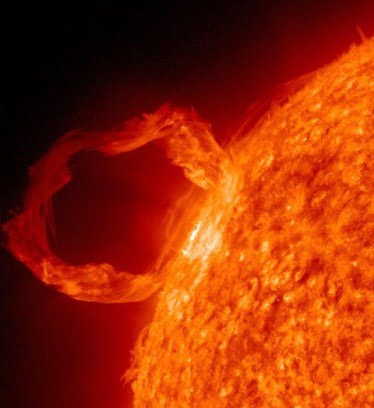 Sun is full of swirling heap of intensely hot gases. It sometimes gushes out billions of tons of charged particles in the form of solar flares and coronal mass ejections. It is called as solar storms. It can be seen as bright areas on the sun and they can last from minutes to hours.

These phenomena called solar storm can send a stream of electrical charges and magnetic fields toward the Earth at a speed of about three million miles per hour.

Trigger of Solar storms starts from huge explosion on the Sun which is called as solar flares & can be compared to billions of nuclear bombs explosion.

It affects earth’s atmosphere to become more ionized and has an effect on radio signals which causes disruptions in satellites & wireless communication.

It causes health issues for airline pilots and astronauts who are at high altitude.

Solar Particles can batter Satellites which are orbiting the Earth during the Solar Storm.

It can disrupt navigation systems such as the Global Navigation Satellite System (GNSS).