In the ongoing General Elections to 17th Lok Sabha some more than 65 delegates invited by Election Commission of India to join the Election Visitors Program.

The 17th Lok Sabha  covers across 543 Parliamentary Constituencies of the country. 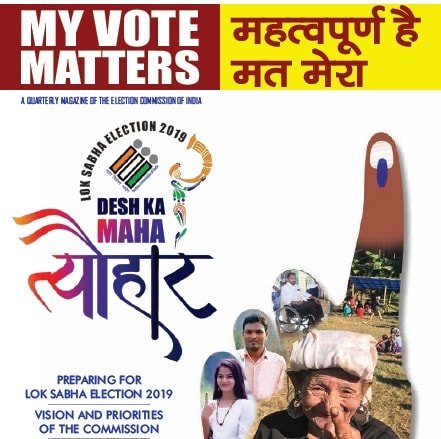 Second issue of (Election Commission of India) ECI’s quarterly magazine “My Vote Matters” was also released on this occasion by the Commission.

National Voters Day Theme 2019: “No Voter to be left behind”
Theme 2018: “Assessable Elections”

The Magazine “My Vote Matters”presents a comprehensive glimpse of preparatory initiatives in different States for the ongoing elections.

This Magazine is bilingual i.e, in English & Hindi

Launched by Election Commission of India, cVIGIL is (an android app) a mobile application for citizens to report Model Code of Conduct and Expenditure violations during the elections.

cVIGIL app can be used for reporting violations from the date of notifications for bye-election/ assembly/ parliamentary elections.

What is unique in this app is that it allows only the Live Photo/ video with auto location capture from within the app to ensure digital evidence for flying squads to act upon in a time-bound manner.

The app can be used on any android smartphone with a camera, GPS connection, Internet and an android operating system of Jellybean and above.

With he help of this app the citizens can quickly report on incidents of political misconduct within minutes of having witnessed them and without the need of rushing to the office of returning officers.

A returning officer is responsible for overseeing elections in one or more constituencies.