A Gajapayana signals the official countdown for Mysuru Dasara. In this, beautiful decorated cloths cover the head of elephant and they march from their jungle camps to Mysuru also known as City of Palaces, marks the beginning of the Dasara Festivals. 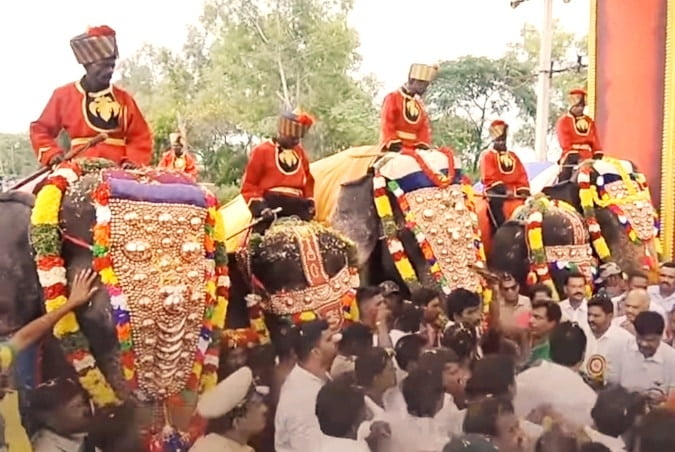 These Elephants take part in Grand Vijaydashmi procession which makes the event look grand and splendid. It’s an ancient practice that was in place since the time of Maharajas.

A mobile blood donation camp in a red luxury bus has been launched by the West Bengal government. Moving in different location it encourages people about blood donation and also collects blood. It is being taught as a major success by some health activists.

It is a practice done by some sunni muslims. Nikah which means ‘marriage’ and ‘halala’ means to make it lawful. Under this law, it’s required that the woman who got divorced should marry another man, sleep with him and then getting divorced again and then observes a period of separation period which is called iddat so that she remarry her previous husband.
Only after the practice of the Nikah Halala a woman is allowed to remarry her previous husband who divorced her three times (triple talaq).

What is Dedicated Freight Corridor (DFC)


Dedicated to freight traffic movement only, Dedicated Freight Corridor (DFC) is a railway route developed by Ministry of railways.

On a Dedicated Freight Corridor (DFC) only freight trains will run and no pasenger trains are allowed on that. Many terminals are being built for the freight loading/unloading. It will also help in the faster movement of goods which at present move at a speed of 70/80kmph speed only.

A memorandum of understanding(MoU) has been signed between the Dargah Committee, the Ajmer Municipal Corporation and Hindustan Zinc for the facelift and cleanup and to manage the age old shrine of the Mystic Sufi Khwaja Moinuddin Chishti, Ajmer.

The Dargah which is there since 13th century was included in the Swachh Iconic Places, a clean­up initiative focused on iconic heritage, spiritual and cultural places. It was started under the Swachh bharat Abhiyan.

Ahead of their most important festival, MONGMONG, the Sangatam tribe of Nagaland’s Kiphire district got seven trucks of rice under Public Distribution System. After the heavy rainfall and landslides the Kiphire District of Nagaland was cut off. But the timely relief of trucks of rice has made their celebration a sweetened affair.

Sangatam Naga as they are popularly called lives in Kiphire district which borders the Myanmar in the Southern part of north eastern state of Nagaland. They practice jhum or shifting cultivation like other tribals in this part of the country.

MONGMONG is their important festival where they worship the God of the house and the three cooking stones in the fireplace. Celebrated in the first week of September every year.
This festival stretches for six days and the objective is of having a good harvest and signifies of living together always.